Deepwater Junior High’s Evelyn Flores is a 2019 National Finalists from Pasadena ISD, and her trip to Washington DC was featured in the Washington Post.

On the second floor of the Supreme Court building, in a room not open to the public, a 14-year-old girl stood in front of a lectern and described the moment she learned to stop trusting strangers.

“My tears blurred the object held in the man’s hand,” Evelyn Flores said.

“My mind was aware of my younger sister in her stroller about three feet away, but my feet were glued to the harsh concrete of the street. The gun was aimed at my dad, and he was brought to his knees. My strong father who was always a constant beam of support was weakened by a piece of metal.”

Flores described the scream she couldn’t summon and what happened next: How, through a haze, she could hear taunts thrown at her father by the man, a neighbor. How she ran home to grab a phone so her mother could call the police and how that, at last, made the man flee. How she went to bed that night with red and blue lights flashing outside her window and woke up changed. READ MORE

Flores and other Do the Write Thing Challenge finalists gave a leather-bound book to the Library of Congress containing 50 essays from across the United States. 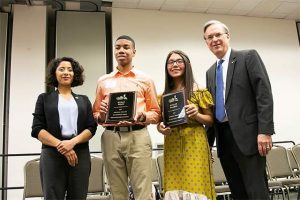 Houston essay drop-offs
We aren’t in the office every day, so please give us a heads up if you are dropping off. Continue reading
Read more. 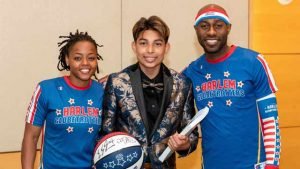